The Unsung Hero of the Ortho Industry – the Rep

The orthopedic industry is changing faster than ever before. Whether you’re a surgeon, sales rep or orthopedic patient, much of the impact is less than positive. It seems that the industry is piling on the sales rep in an effort to marginalize and some might say eliminate the rep altogether. I recently read a headline about HCA’s record quarterly profits topping $980 MILLION. Keep in mind that this was Q4, 2016 at a time when hospitals are crying poor while fighting orthopedic companies on pricing like never before. Gone are the days where it was customary to assess a 3% price increase tied to the Consumer Price Index (CPI) each year. Now as a rule, hospitals and GPO’s are forcing prices to new lows year over year and even seem willing to sacrifice the presence of the rep in the operating room. It is impossible to argue the point that the orthopedic sales rep is being marginalized. In recent years, they have been told by various constituents that they are a “non-essential” part of the healthcare continuum. In an effort to increase profits, not only are these hospitals and GPO’s fighting to bring down prices, but they also seem to be fighting over the remaining piece of the pie belonging to the sales rep by way of confiscating their commissions. But are sales reps expendable? Do they only add cost to the continuum as some suggest?

If reps are eliminated from the picture, who will step in to bear the burden of support that surgeons are accustomed to receiving from their sales reps? Are surgeons going to be expected to hire P.A.’s to fill in the void of what the reps currently do? Does anyone really grasp the full picture of what the orthopedic rep does and value they bring to the healthcare system? Let me try to give you a former sales rep’s perspective on the value of the orthopedic sales rep.

When I started as a sales rep for Zimmer in the orthopedic industry 30 years ago, it was evident to me that being a rep afforded me the privilege of being an integral part of the surgical team to ensure the most optimal surgical outcomes for the orthopedic patient. There was a level of trust, camaraderie and appreciation that made the role extremely rewarding. Reps like myself felt appreciated because it was evident that surgical teams wanted us in the room during cases because of the unique value we brought to the case. Ours was a special role of supporting both the surgeons as well as the hospital’s support staff. Whether we were an extra set of hands to hold the patient’s leg during prep or opening that sterile peel pack when someone dropped a disposable suction tip when the circulator was preoccupied, we stepped in to do whatever we could to keep the case progressing without a delay. Having a rep in the room was an obvious value to all because we possessed a unique perspective and skill set. We were the ones with experience in those unfortunate scenarios when things did not go just like they are supposed to in the technical video. On the infrequent occasion of a surgical complication, the reps are typically leaned on for their expertise. They help the surgeon troubleshoot during the procedure to bring about an optimal successful outcome. In many cases, the rep is the person with the most diverse experience with the products and procedure even if only by observation. Countless times, I was leaned on by the surgeon to solve a complex challenge that arose either out of some unexpected pathology or a complication. I was the one who witnessed thousands of procedures encountering far more complications and variables than the scrub tech, assistant or the surgeon. I was the one with the broadest experience to walk them through how to resolve it in such a way as to bring about the best result. In extreme cases, observers said that watching a good sales rep in surgery was often like seeing the sales rep “conduct surgery through remote control.” I was accustomed to it and considered it a privilege to ensure my surgeon’s patient had the best possible result. This kind of support is an everyday routine for many sales reps in O.R.s around the world. Before my time, I heard stories from reps that actually scrubbed in and held retractors, and in some cases doing far more of the procedure than anyone would expect until finally someone got into deep trouble. There was a book written about it called, “Salesman Surgeon” that recounts a situation where the surgeon was not even in the room when some cases were being done. 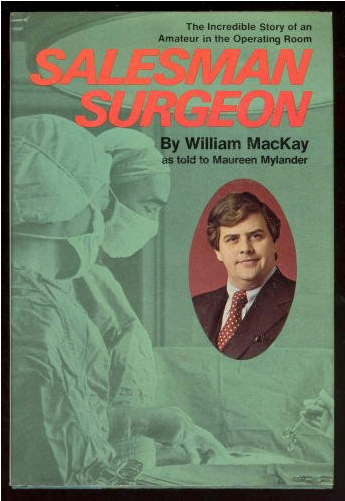 We are a long way away from that, and that is a very good thing. However, there are very real benefits as a result of having reps participate in the O.R. I am convinced that there are profound benefits to the hospital, surgeon, staff and patient.

These merely represent the value of the rep in the room. However, there is great value to healthcare beyond having an orthopedic sales rep present during surgery. In fact, it is what leads up to the surgical theater that is often overlooked and without a talented rep, a void will be created that must be filled by someone. It was always gratifying to me the appreciation that I received from nurses and administrators. However, I remember showing up to sell in my new territory at an O.R. in Lancaster, CA to introduce myself as the new Zimmer rep back in 1989. I entered the O.R., while staying behind the line, and asked the gal at the desk if I could speak with the O.R. Supervisor. She gave me a long up and down look then proceeded to speak into the microphone to the overhead intercom to announce my arrival. “Jennifer, there’s a gentleman with tassels on his shoes at the desk waiting to see you.” That is how some people see reps. Just well dressed people who waltz in and expect to have the red carpet to sell people stuff. In reality, reps spend a ton of time meeting with surgeons to help them with preoperative planning, reviewing x-rays to ensure that they are ready for anything when the patient is under anesthesia. It is the job of a rep to be 100% certain that you have everything you need for the case which may require flying equipment in from cross country, but not having it is never an option.

It seems overlooked that sales reps, especially those who cover trauma, are on the clock 24/7 in support of their surgeon and hospital clients. It might seem like no big deal to those who don’t understand the implications, but imagine for a moment that you are a sales rep and you have 20 surgeons you support, each with their own individual schedule and demands. It is a balancing act like no other to support the needs of these surgeons and their patients. Not showing up or having the equipment ready for a case is never an option, and certainly would result in risking losing business and tarnishing your reputation. There are always competitors standing in lurch waiting for someone to mess up. I always said that for every surgeon who uses a product, there is a rep “on deck” waiting for their chance to save the day when you screw up.

Another reality for many reps is never taking a family vacation that wasn’t somehow tied to a business event. In my day, not only did I have to pay my own way but also those of some of my surgeon customers and their families. It wasn’t so much about getting new business as it was about protecting your business. The expectation was that since they used my products and I benefitted from it, I would cover the major expenses of their trip to get CME credits. The risk was that if I did not, one of my competitors would entice them to go to one of their meetings and they may come home and switch.

The industry has changed in some positive ways as well. When I was the Zimmer rep, I covered everything from Recon to Trauma. This meant that I could easily be in surgery all day on Monday, get a trauma case in the evening requiring me to be there all night, and not make it home before my 7:30AM case the next morning. When I was on call, I could be at dinner or a movie with my wife and suddenly have to run her home to run sets and cover a case. Sunday mornings looked like driving to church in separate cars in case the pager went off and I had to leave on the spur of the moment.

The point I’m making is that in a very real sense, many sales reps have the insane schedule of a surgeon with many similar time demands, and yet without some of the upside. It is also the rep that enables surgeons to make quick decisions about treatment of a patient and they know their rep will take care of getting everything they need to fix the patient. It may be as simple as calling the office and having it delivered or more complex as having to drive across town to borrow it from another hospital or distributor, or even times when you have to contact someone out of state and have equipment flown cargo on a commercial airline to get there in time. The reality is that most of the stressful things that happen never see the light of day and no one in the hospital is aware of the extreme measures taken in order to see to it that the patient got the very best treatment.

It is unclear to me who will be there to step into the gap and support the orthopedic surgeon if the rep is tossed to the side. I think we always expected that over time the market would force out the more skilled and experienced orthopedic reps in favor of cheap labor, similar to a pharma rep. Our saving grace was always that they didn’t like to work that hard. Perhaps the time has come that the market will shift the reps support responsibilities on to the surgeons who will undoubtedly need to hire someone to support them. Maybe the market simply needs to see what it looks like to force the best and brightest out and see the impact on the surgical teams. One thing is for sure, the market seems to behave like they see reps as unnecessary. Time will tell.

Surg.io is the total orthopedic distributor/rep solution to go from working “in” your business, to working “on” it. A simple software solution that adapts to your workflow enabling greater communication, accuracy and efficiency. Surg.io saves time and money. It’s like having an extra person on the team. /Surg.io