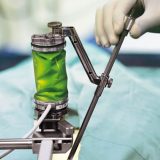 CAESAREA, Israel, Feb. 14, 2018 /PRNewswire/ — Mazor Robotics Ltd. (TASE: MZOR; NASDAQGM: MZOR), a pioneer and a leader in the field of robotic guidance systems, reported record fourth quarter and full year revenues of $19.1 million and $64.9 million, respectively. As previously announced, the Company received purchase orders for 27 systems in the 2017 fourth quarter, including 24 Mazor X systems. For the 2017 full year, the Company received 73 system orders, of which 64 were for the Mazor X system and nine were for the Renaissance system.

“Our effective execution during 2017 continued to strengthen our global leadership position in spine robotics and led to record systems sales and recurring revenue,” commented Ori Hadomi, Chief Executive Officer. “2018 will be a year of transition during which we will emphasize synergy with Medtronic as well as procedure growth. Mazor is well positioned to benefit from the accelerating adoption of robotics for spine surgeries.”

The tables below include reconciliations of the Company’s GAAP results to non-GAAP results. The reconciliations relate to non-cash expenses in the amount of $1.5 million with respect to share-based payments and amortization of intangible assets recorded in the fourth quarter of 2017. On a non-GAAP basis, the net income in the fourth quarter of 2017 was $1.9 million, or $0.03 per share, compared to net loss of $3.1 million, or $0.07 per share, for the year-ago fourth quarter.

Following an additional analysis of the 2017 third quarter results, the Company is further adjusting its cost of goods sold by $1.1 million to $7.0 million due to the inaccurate recording of purchase of goods.

The amended financial results for three and nine months ended September 30, 2017 are available through the Company’s website at

A replay of the event will be available for two weeks following the conclusion of the call. To access the replay, callers in the United States can call 1-888-203-1112 and reference the Replay Access Code: 5797376. All international callers can dial +1 719-457-0820, using the same Replay Access Code. To access the webcast, please visit www.mazorrobotics.comand select ‘Investor Relations.’

Use of Non-GAAP Measures

In addition to disclosing financial results calculated in accordance with generally accepted accounting principles in conformity with International Financial Reporting Standards (GAAP), this press release contains Non-GAAP financial measures for gross profit, operating expenses, operating profit (loss), net income (loss) and basic and diluted earnings per share that exclude the effects of capitalization of development costs, non-cash expense of amortization of intangible assets and share-based payments. Management believes that these non-GAAP financial measures provide meaningful supplemental information regarding the Company’s performance that enhances management’s and investors’ ability to evaluate the Company’s net income and earnings per share and to compare them to historical net income and earnings per share.

The presentation of this non-GAAP financial information is not intended to be considered in isolation or as a substitute for the financial information prepared and presented in accordance with GAAP. Management uses both GAAP and non-GAAP measures when operating and evaluating the Company’s business internally and therefore decided to make these non-GAAP adjustments available to investors.

This press release contains forward-looking statements within the meaning of the Private Securities Litigation Reform Act of 1995 and other securities laws. Any statements in this release about future expectations, plans or prospects for the Company, including without limitation, statements regarding that 2018 will be a year of transition for Mazor, Mazor benefitting from the accelerating adoption of robotics for spine surgery, the expected decrease in sales and marketing expenses, and other statements containing the words “believes,” “anticipates,” “plans,” “expects,” “will” and similar expressions are forward-looking statements. These statements are only predictions based on Mazor’s current expectations and projections about future events. There are important factors that could cause Mazor’s actual results, level of activity, performance or achievements to differ materially from the results, level of activity, performance or achievements expressed or implied by the forward-looking statements. Those factors include, but are not limited to, the impact of general economic conditions, competitive products, product demand and market acceptance risks, reliance on key strategic alliances, fluctuations in operating results, and other factors indicated in Mazor’s filings with the Securities and Exchange Commission (SEC) including those discussed under the heading “Risk Factors” in Mazor’s annual report on Form 20-F filed with the SEC on May 1, 2017 and in subsequent filings with the SEC. For more details, refer to Mazor’s SEC filings. Mazor undertakes no obligation to update forward-looking statements to reflect subsequent occurring events or circumstances, or to changes in our expectations, except as may be required by law.