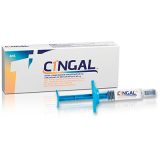 BEDFORD, Mass.–(BUSINESS WIRE)–Anika Therapeutics, Inc. (NASDAQ: ANIK), a global, integrated orthopedic and regenerative medicines company specializing in therapeutics based on its proprietary hyaluronic acid (HA) technology platform, today announced results from its CINGAL® 16-02 clinical trial, an active-comparator Phase III study being conducted to support U.S. registration. CINGAL has previously been evaluated in a placebo-controlled Phase III clinical trial (13-01) that demonstrated safety and efficacy through 26-weeks. The 16-02 trial compared CINGAL, a combination of cross-linked HA and triamcinolone hexacetonide (TH), with TH alone and cross-linked HA in treating patients with osteoarthritis (OA) in the knee. The primary endpoint was a comparison of the pain reduction of CINGAL compared with TH alone at 26-weeks. While CINGAL achieved greater pain reduction numerically at every time point in the study, the difference at 26-weeks did not reach statistical significance.

The patient response to CINGAL in the study was strong, as significant improvements in pain, function, and quality of life were observed at levels consistent with, and in most cases greater than, the results of the 13-01 placebo-controlled Phase III study of CINGAL. A strong safety profile was also shown, matching previous clinical studies as well as real-world experience from growing product use globally. The duration of pain reduction was also similar to the previous study as patient improvement after CINGAL injection was maintained near peak levels throughout the 26-week duration of the study. Follow-up of patients continues in a prospectively designed extension phase to the study, which will gather data through 39-weeks.

Prof. Laszlo Hangody, MD, Ph.D., DSc., the global principal investigator of several CINGAL trials, said, “While it has been observed that TH has a longer duration of effect than other corticosteroids, the results in this study were surprising. Nevertheless, the patient response to CINGAL in this study was strong as patients received statistically and clinically meaningful rapid and long-lasting improvement in symptoms compared with base-line, consistent with the previous study as well as my experience in my practice. Taken together, the results of the two Phase III studies validate the effectiveness of this novel combination for use in patients with knee osteoarthritis.”

CINGAL is the first and only commercially-available combination viscosupplement, and it is currently being used successfully by physicians to provide rapid and long-lasting relief from pain and discomfort caused by OA for patients in a growing number of countries. CINGAL is a patented formulation composed of the Company’s proprietary cross-linked sodium hyaluronate and triamcinolone hexacetonide. CINGAL is Anika’s third-generation viscosupplement, following the Company’s ORTHOVISC and MONOVISC products, to treat pain associated with osteoarthritis of the knee.

Anika President and CEO Joseph Darling said, “OA patients continue to benefit from the proven safety and efficacy of CINGAL in growing numbers outside of the U.S. where CINGAL is approved. The benefits of combining HA and a corticosteroid are mirrored by physician feedback and real-world experience. While we expected CINGAL to perform as well as it did, we were surprised that the difference in pain reduction seen in this trial did not reach statistically significant levels at six months. We will however, continue to monitor the results of the ongoing 3-month extension study. We are actively reviewing the data and our plan is to work closely with regulators to come to an understanding of the next steps required to gain U.S. regulatory approval of CINGAL. We remain fully committed to bringing this impactful OA solution to U.S. patients and physicians.”

Anika Therapeutics, Inc. is a global, integrated orthopedic and regenerative medicines company based in Bedford, Massachusetts. Anika is committed to improving the lives of patients with degenerative orthopedic diseases and traumatic conditions with clinically meaningful therapies along the continuum of care, from palliative pain management to regenerative tissue repair. The Company has over two decades of global expertise developing, manufacturing, and commercializing more than 20 products based on its proprietary HA technology. Anika’s orthopedic medicine portfolio includes ORTHOVISC, MONOVISC, and CINGAL, which alleviate pain and restore joint function by replenishing depleted HA, and HYALOFAST, a solid HA-based scaffold to aid cartilage repair and regeneration. For more information about Anika, please visit www.anikatherapeutics.com.