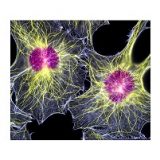 HOUSTON–(BUSINESS WIRE)–MRI analysis of patients who received intradiscal injections of human dermal fibroblasts (HDFs) shows significant improvement in disc height after six months. This is the latest evidence from SpinalCyte, LLC, a Texas-based regenerative medicine company focused on regrowth of the spinal disc nucleus using HDFs. This suggests there is a quantifiable regenerative process stimulated by its new cell-based therapy, CybroCell, which is the first off-the-shelf allogeneic HDF product for treatment of degenerative disc disease.

Preliminary six-month MRI data on 18 patients has been completed with an independent radiological expert providing MRI analysis. Patients who received CybroCell or CybroCell with PRP demonstrated superior outcomes versus the control group. Of patients treated with CybroCell, 83 percent demonstrated increased disc height or no change in one or more discs compared to only 66 percent of control patients. More than half (52 percent) of CybroCell-treated discs showed either increased disc height or no change (a clinically relevant outcome) versus only 38 percent of control discs.

“We are encouraged by the superior radiographic analysis of the CybroCell patients over the control patients,” said SpinalCyte Chief Scientific Officer Thomas Ichim, Ph.D. “We have demonstrated clinically relevant outcomes which include increased disc height for those patients who received treatment injections.”

This data suggests CybroCell possesses tangible benefits for people suffering from degenerative disc disease, a chronic condition for which previous treatments have not demonstrated a physical alteration in the degenerated disc.

Over 50 percent of patients treated with CybroCell in the trial reported significant therapeutic improvement. Preclinical animal studies demonstrated that intradiscal injection of CybroCell resulted in significant increase in regeneration, disc height, gene expression of structural genes such as collagen type I and collagen type II, and the contents of structural proteins such as proteoglycan, which in turn generate the jelly-like material (disc nucleus) that provides cushioning for the spine.

“MRI evidence of disc regeneration is the most important clinical validation to explain the reduction in pain of our study patients,” said Pete O’Heeron, Chief Executive Officer, SpinalCyte. “This study provides real evidence of pain reduction and disc regeneration at only six months. The CybroCell product has the ability to change the quality of life for these chronically diseased patients and eliminate the need for opioid use in patients suffering from chronic back pain. CybroCell can address an urgent public need and impact the national opioid crisis in the U.S.”

SpinalCyte’s Phase 1/Phase 2 clinical trial is the first allogeneic use of fibroblasts outside of skin conditions. Considering how relatively easy it is to collect large numbers of fibroblasts that would otherwise be disposed of, researchers believe this trial will advance the clinical translation of fibroblasts into other areas of regenerative medicine.